The results come from NASAA’s recent Pulse Survey on senior financial fraud, a poll conducted internally of its members from July 24 to August 4. The findings offer a unique insight into the concerns and perspectives of the securities regulators who are the investment industry’s local cops on the beat.

“It is imperative that we detect and prevent senior financial fraud before criminals who prey on our most vulnerable citizens steal from and devastate them,” said NASAA President and Minnesota Commissioner of Commerce Mike Rothman. “The clear message from our NASAA members, who are the securities regulators on the frontlines, is that we need everyone to step up and apply greater resources to stop financial fraud against seniors.”

The responses suggest a need for increased focus by the securities industry on prevention and detection tools for senior financial exploitation. Top takeaways include:

These findings come in light of another recent survey NASAA released in June that provided insights into the industry perspective on the issues surrounding senior-related practices, procedures and protections from fraud.

The June survey looked at the practices of more than 60 broker-dealer firms throughout the United States. Among other findings this study found that more than half (54 percent) of the responding firms lacked a formal policy defining senior customers, and less than half (41 percent) had developed a form for customers to identify an emergency or trusted contact person.

Still, while the previous report shows that firms can do more, it also makes clear that they are taking the threat seriously. The broker-dealer firms included in that report alone reported nearly 2,300 cases concerning possible financial abuse or exploitation of seniors to outside authorities in 2015. The report also found that seniors were at higher risk of fraud, as most of the senior abuse cases reported (45 percent) involved customers in the 81-90 year age group. That finding was confirmed by NASAA’s Pulse Survey, in which regulators overwhelmingly identified the “Silent Generation,” (ages 70 and older) as the most vulnerable to financial fraud.

For additional information on NASAA initiatives to protect seniors and other vulnerable adults from financial exploitation, please visit NASAA’s Serve Our Seniors website at serveourseniors.org. 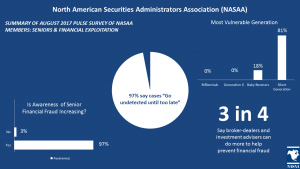