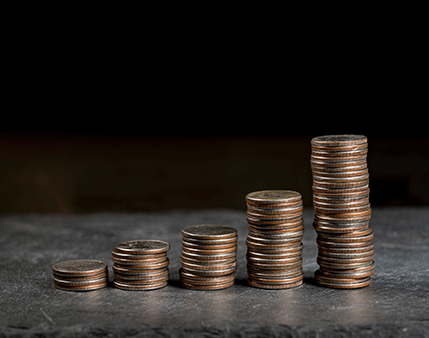 Get in the know about compound interest!

Compound interest has been called 8th Wonder of the World. It can be a double-edged sword, benefiting those who use it to build wealth, and burdening those who accrue interest on loans and dig themselves into deep financial holes. This alert discusses the basics of compound interest and the effect it has on your financial future.

What is compound interest and how does it work?

Example of how compound interest can help build wealth:

Warren recognized early in life that if he routinely saved and invested, he could accumulate wealth and live a better life. He started investing at 22, adding $500 per month to an account which held an index fund tied to the stock market. The index fund returned 7% per year for the next 40 years, when Warren retired at the age of 62. The initial $500, and the monthly contributions thereafter, grew to almost $1.2 million thanks to time, compound interest, and Warren’s investing strategy.

Warren’s friend Charlie wasn’t able to put away as much as Warren during his career, but he invested a $10,000 inheritance at 22 in the same index fund. Charlie’s investment, despite him not adding any more money to it, was worth almost $150,000 when he turned 62.  How? Time and compound investment returns caused Charlie’s inheritance to grow without him adding a penny.

Example of how compound interest can dig financial holes:

Brandon took out student loans to fund his education, finishing school with $50,000 in student loans at a 7% annual interest rate. Brandon was not able to find a job in his field with a competitive salary, so he entered an income-based repayment program to make ends meet, paying $200 per month. While the repayment program freed up money to help him pay his monthly bills, the payments were not enough to cover the interest on his student loans, much less the principal. After ten years, Brandon’s loan balance grew from $50,000 to $65,866, despite making payments every month. Time and compound interest caused his loan balance to grow.

Brandon’s sister Amanda wanted to go on vacation, but had not saved enough money. Instead of scaling back her plans, she booked a trip to Tahiti on her credit card. Unfortunately, Amanda was unable to pay off her credit card balance, and the interest charges began to compound. Amanda went from owing $10,000 to owing more than $10,786 one year later, even though she paid $150 per month. The credit card’s high 25% interest rate meant that Amanda’s $150 payments didn’t even cover the interest on her debt each month.

How can I make compound interest work for me?

What can I do to avoid the pitfalls of compound interest?